It's Chinese New Year Celebration for our school today. They are also colaborating it with Pn. Azmah (PK 1)'s farewell.

The school organinsed it. We Chinese Society were the OFFICIAL PARTNER.

The MC for the day is Azman and Yvette. 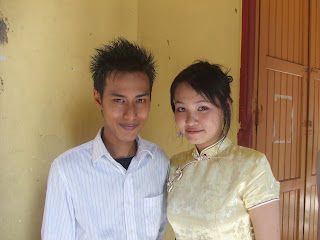 Azman is saying the CHINESE PART, and Yvette the BM PART.
Yvette is damn concerned about her role. She kept badgering every single soul for a cheongsam which she will be wearing it for about 3 hours ONLY. At last she managed to borrow it from Pn. Helen.
Azman is a Malay guy who speaks Chinese. Not exactly excellent, but still better than other dungus who have no idea to utter even one word.

Oh, by the way, the teachers chose them, which means they have got nothing to do with me and my Chinese Society. If I am in charge, I would not let them be the MC. 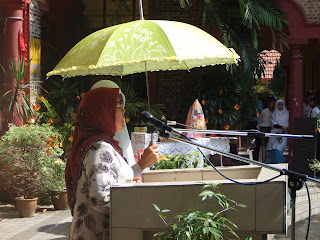 And also as usual, no one was listening.
LOL

Then we have Lion Dance.
Man you know the Lion Dance was damn cool!! It's our own students. They are only Form 2 boys. I think they weight even lighter than the damn lion thingy. 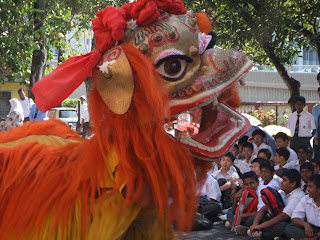 Next the Chinese Drum performance was by 5 Form 3 kids.
They practiced damn hard to made it a success. They even came back to school during
Thaipusam holidays just to practice.
They somehow made me so touched. 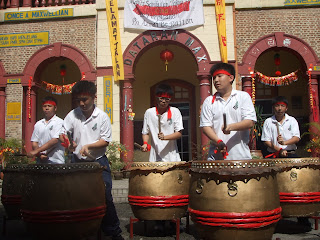 Then the wushu guys did their stuff.
Aik Cheong, my classmate, is damn pro in this. He lead them.
Wow their stunts were truly AWESOME!! 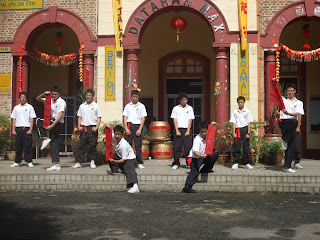 Next we had the calligraphy contest for the teachers. Datin don't even wanted to participate when her name was mentioned. So unsporting. We were a little dissapointed. 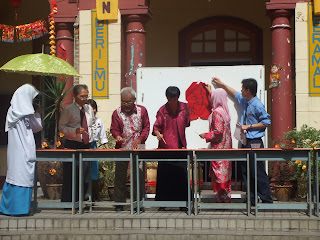 but never mind!! No one is changing our CNY spirit!!

See Bee lead some girls to dance for the closing ceremony. 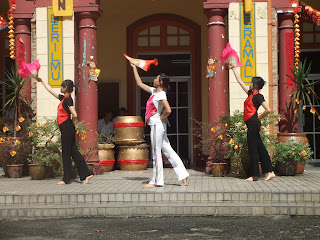 Then suddenly they wanted us to run the mandarin eating competition which was initially cancelled.
Me and Boon Fei was like: 'Deng!'

Basically the boys shot up on stage. 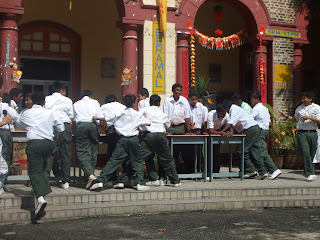 Like they never had mandarin oranges before.
It was funny though.

After everything I treated all my members and performers Cheezels and Twisties because everyone had helped me so much and I wanted to express my gratitude.
And they were extremely happy and overexcited.
And they called me 'lenglui', which indeed made my day.
Just joking, lol. 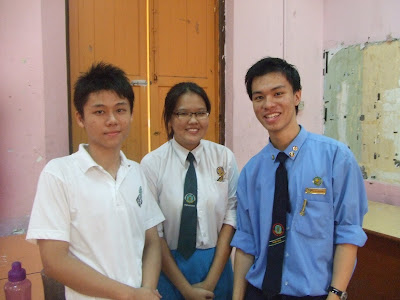 Boon Fei (left) and Darryl. Both are my vice presidents. They helped me a lot throughout. 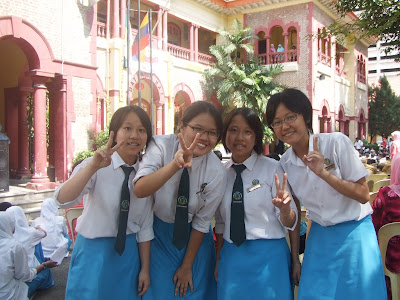 The twins and Zi Qin. My best committee members. They helped me the most in decorations. As well as my best friends!! 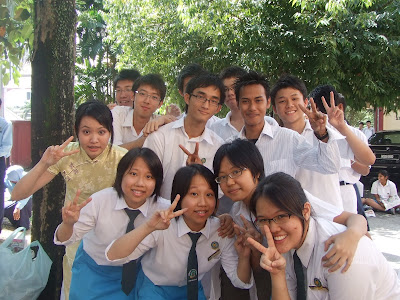 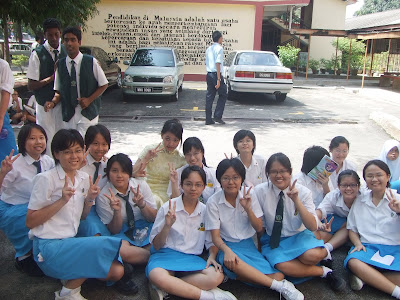 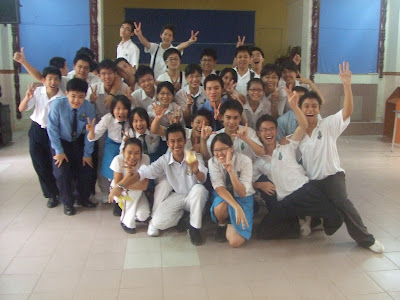 Thanks and (hugs) everyone!!

I am damn proud to be your president!!
Chinese Society ROCKS!!
Posted by huiting at 11:52 PM