I had been really anticipating a visit to the twins hometown in Sabak Bernam, and this very day came true on the first Saturday during the holidays. Knowing that they were going to visit their grandma, I boldly requested for a stay.

So I packed my belongings, gobbled down my dinner and grabbed my phone, cam and charger and was out of the door in 10 minutes.

We arrived at the twins grandma's house approximately at 8pm. That day was elections results day so we spent the whole evening watching the news and complaining loudly about the politicians. The joke of the night was we managed to finish a whole pack of almond chocolates (which the twins regarded as cheap), three quarter pack of fish strips and a few boxes of crysanthemum tea. Two am, Yoong Ling was already asleep on the couch and finally Yoong Sin announced that she cannot tahan, and we all went to bed.

The next morning, we went cycling. I was extremely excited as I have not touched a bicycle for almost 3 years. Yeah I know. KL wui....where got place to cycle? The conversation of the day:
YS: Hui Ting, you know how to cycle?
HT: Of course la.
YL: Oh yeah?
HT: Yeah la. Eh, I learnt from tricycle to bicycle man!
YL: Yeah meh?
HT: Yeah la. OI!! FUCKER!! I BLOODY KNOW HOW TO CYCLE!!
So, we cycled. Yoong Sin kept complaining that her bicycle got problem. 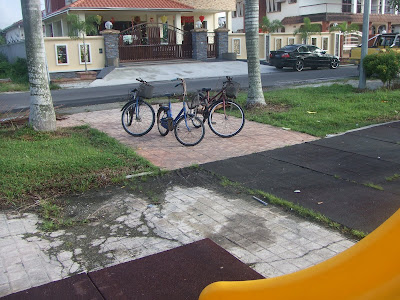 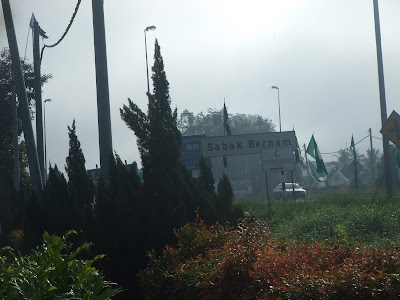 That's a signboard by the mainroad saying 'Sabak Bernam'.

Firstly, we de-toured the place. Sabak Bernam was a small place, very rural and very quiet. Yoong Sin showed me the place where she worked as a clerk last holidays. According to her, it 'brings back bad memmories'. We also went to a children's playground and practiaclly had fun there. lol. We are the conquerers of The Kingdom of Slide. LOL!!

We saw a cow!! Up close. This is the first time I saw a cow so damn close and there was a crow standing on its back. 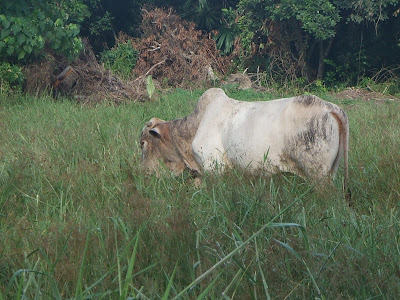 Then we went to the most beautiful place in Sabak Bernam. Sungai Sabak is a river, branched from Sungai Selangor. Oh, I saw mangroove forests. It was on the banks of Sabak River. 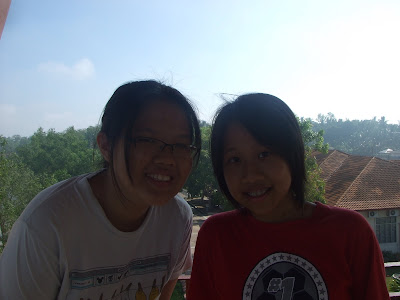 Me and Yoong Sin at the bloody watch tower. 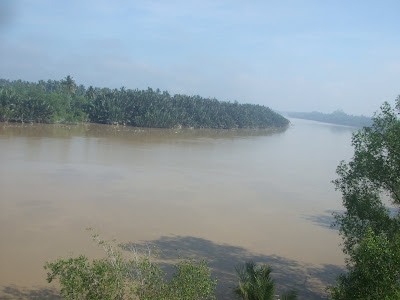 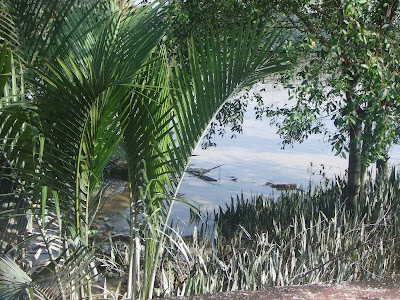 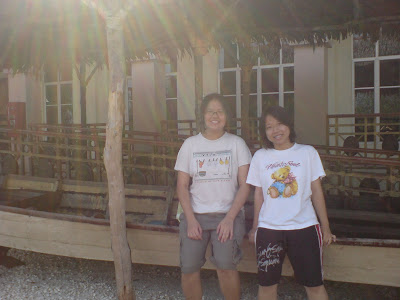 That's us on a sampan in front of the museum. It says 'jangan naik'. But here at Let There Be Chaos, who cares?

The best thing was, there was a Watson and 7-11 on the main street. Wow. Not bad for a small place like that. Yoong Ling bought shavers in Watson. We also ate the legendary yao yao ping in the bus terminal. Yoong Sin said that we can actually take a bus to Anson and we can shopping there. The yao yao ping was damn nice.

We took lunch at The twins yi po's house. Then, they went to the barber and I watched a whole afternoon of AXN.

It was raining during the evening. After dinner, we went home.

It was a totally great stay at Sabak Bernam. I really wished that I can have a longer stay there, so that I can explore more places, meet more people. Although Sabak Bernam is not a metropolitan city, and it's not very advanced, but it's a place that you can see things that you have never seen if you have lived in the city throughout your entire life. I have lived in KL for 18 years, addicted to city life, and this had been an eye opening experience for me.

Viva Sabak Bernam.
Oh, it sounds lame but that's what I wanna say.

PS: Some photos are of me and Yoong Sin and me and Yoong Ling. But they two looked just alike, so just put either one. haha.
Posted by huiting at 1:08 PM

you should come to Sarawak sometime. =)