I was listening to the radio when Bleeding Love came to the tune. So, kinda reminisced those days when I was banging my head because STPM was around the corner, having study groups all over the place and revising like mad. 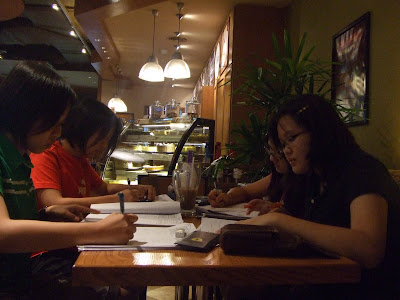 Used to have group study before Maths tuition and it would be like 5 or 6 hours of work in a row. Sometimes, upon nervous breakdown, we'll go out for a walk to chill and relax. After too much coffee and air-cond will leave us excited and we'll keep swearing loudly as the tension increases.

Scene: Raining
SP: Walau, a lot man!
HT: Diamlah, like I don't know.
YS: If there's a rain like that after STPM, I wouldn't hesitate to drench myself.
YL: If STPM ever ends. Man, I would have stood and let the rain pour on me.
SP: I would have screamed in the rain.
HT: I don't care. After STPM we would come back here and sit one day here, doing everything, except studying.

Shin Peih and me would plug our MP4 players on and shut down form the outside world. Yoong Sin and Ling likes to complain about the lighting. Too romantic for studies, they say.. LOL

Going there once again after STPM was superb. Just sit and talk. Short and sweet, no books attached. LOL 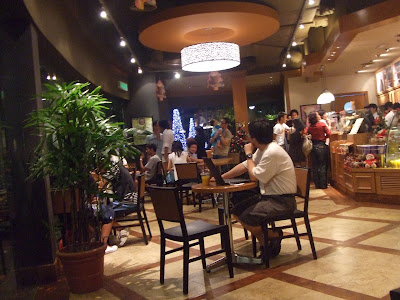 Location B: Starbucks Kepong
Happens to be the only Starbucks of the perimeter. The next nearest one would be in Jalan Tun Ismail (which is PWTC) or One Utama. Normally we would combine a few tables and poured over books. It started to be a spot when Shin Peih and I group studied Biology. And it expanded to studying Chemistry and even PA. And even Michelle joined us when we were discussing about Inheritance and Genetics. The barista knew us quite well. =P 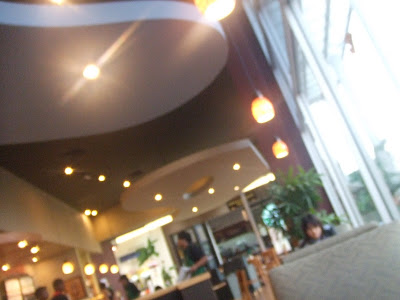 The very day after STPM, I went there alone to pamper myself a session without studies. So, proven....=D=D=D 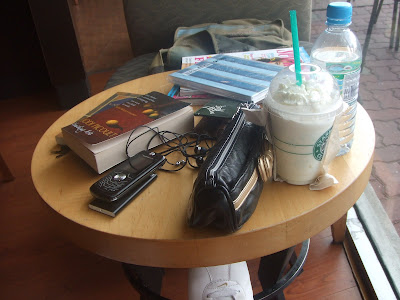 Location C: McD
Due to the unlimited refills and comparatively cheaper price, it would be a perfect spot. The only drawback was: too much noise. Usually I would go alone in the mornings and only join a group in the afternoon. Then back during the evenings. So it would be like 4 to 5 refills of coffee every visit.

And too high to sleep and relax when I get home. Bad caffeine. Remember there was once where Zi Qin and I were studying 12 hours non stop of Organic Chemistry. 10 to 10. We almost became saints on that day. XD

Conclusion:
Gone were the days of STPM, and HELLO UNIVERSITY LIFE! STPM is indeed a very tough path to choose. Those who had walked it, I salute your courage. After the exam, I really really missed school life and I wished that I was back in school, fighting for a goal and a purpose. Not just living day by day here waiting for nothing.

All the best.
Keep those prayers going.
I'll be praying for you. = )

when's the result????
where did u apply???
waaaaa~~~~
huhuuh...
finally u guys will be joining me in the ever so famous university life...
wuuuu~~~

uhuh Amirah..Miss you soo muchie lar! Results will be out somewhere in March, which is soon, which is scary! uni will commence in June or July, Applying whichever course which suits our results and strengths and of course interests. =D

ouch.. results r making me to have nightmares now..T_T

i miss my schooling days too..
uni life wil b another kind of experience.. enjoy it to the fullest too..
all the best~!