A lot of things happened today. 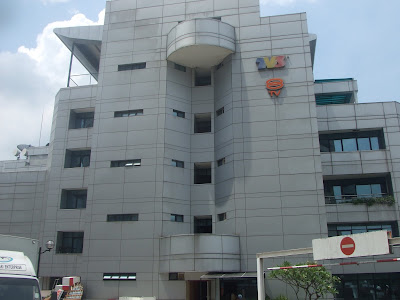 8TV is my favorite TV channel. So I am very excited to visit their broadcasting studio. It's in Bandar Utama, just next to 1 Utama. Oh anyone living in KL should know this.

This guy, Azwar is the facilitator leading us through the trip. According to him, Media Prima is the big umbrella and underneath it is TV3, 8TV, TV9 and recently NTV7 is going to join them.They also have 2 radio stations namely Hot FM and Fly FM. By the way, NTV7's studio is still in Glenmarie but their offices are already in the media prima building. Actually, 8TV's lisence was bought from Metro Vision after they ceased their operation. 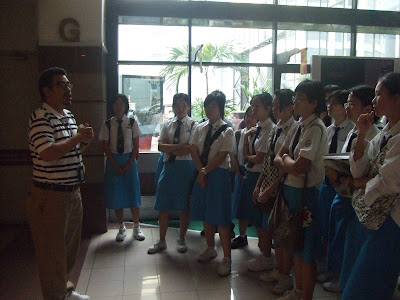 
I really salute Mr Ahmad Izham Omar, the CEO of 8TV. He thought about the public and did a survey and found out that what they need is for the urban and chinese market. So they imported the best series and shows from all over the world. Like the some of the Korean dramas, reality shows and stuff. Their braand manager is constantly in and out of the country seeking for new shows. Well, he also kinda believed in the local entertainment industry while everyone thought it was non-profitting. He started to support and brought bands together. Made local dramas. As a result we can see bands like OAG and local dramas like Goodnight DJ, Ghost, Kami.....Reality shows such as One in a Million, I wanna be a Model are their home made shows.

Well, I am quite impressed.

Actually the Quickie and the E News are 2 stes in a studio. It's a multiple camera studio. They shared the studio, the camera, and the lighting and stuff. And it's actually very small. Azwar told us that it looks big on TV because of the lens of the camera. You actually look 10kgs more on TV. Wow.. That explains why some celebrities look better in real person than in TV. Blame the camera. 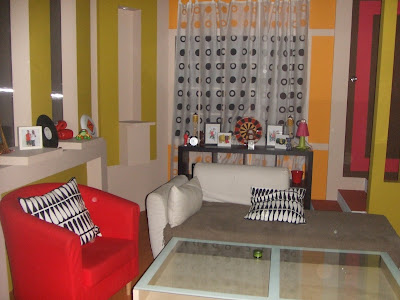 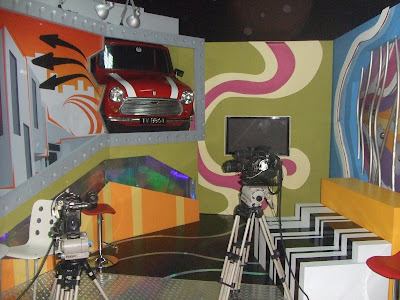 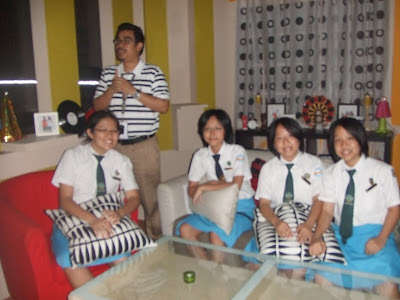 Four of us at the Quickie set. Haha...with Azwar talking behind us. 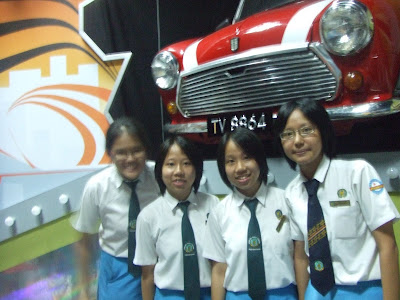 At the legendary mini cooper at the E News set. By the way, this Mini Cooper just only have the front. The back had been chopped off...haha 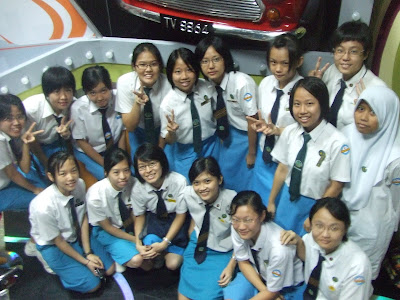 All girls. You know it's like a lot of cameras. So we had difficulty to focus on which cam. hehe...like celeb.

We saw Phat Fabes on the Fly FM studio. And a DJ from Hot FM. Cool..... Mr. Ng said Phat Fabes was previously a Maxwellian. 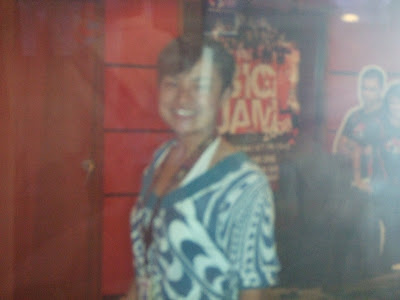 Hot FM DJ. Blur photo coz we were separated by a glass window. 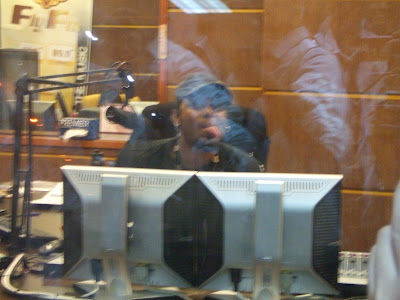 We toured the Mandarin News set too. It's also used as a Green Room. It means the green backdrop can be used as any background. It's so small, that we have to tour the studio 10 by 10. 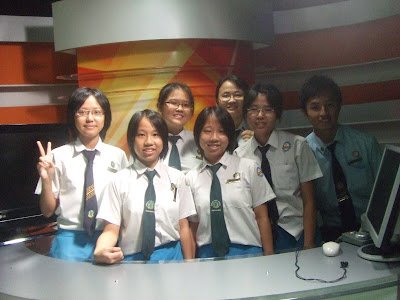 There are some small facts that I think I would like to share. Their best ratings series are the Desperate Housewives. And their Brand Manager went through a a lot of trouble to get license to broadcast Year 4. Gossip Girl is getting more attention. Buying the license from Idol to hold Malaysian Idol is extremely costly, even the brand is there. It cost them all of their sponsorships. That's why they switched to their home made singing reality shows like One in a Million. 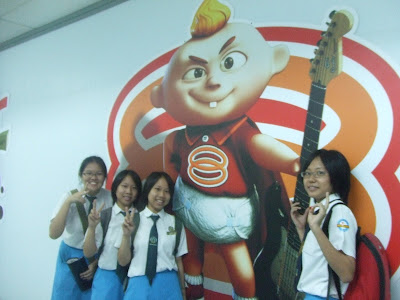 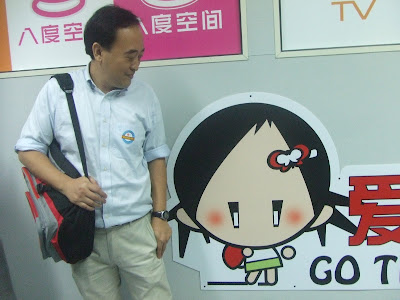 This trip is very enlightening and eye opening. I am glad I abandoned my Chemistry experiment in school and followed the team. Hehe... 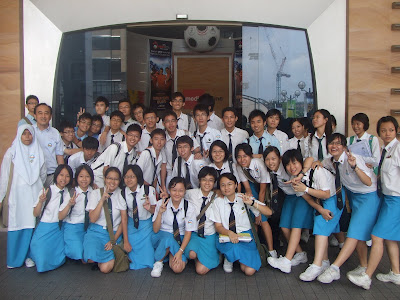 Group Photo!! Everyone is looking at different directions. What la!

PART 2
Next, we went to 1Utama. Because we are finally meeting Chris, Kang Zhi and Chui Geok after soooooooo loooooooooooog. Wah!! I really really missed them sooooo much.

We went TGI Fridays for lunch. 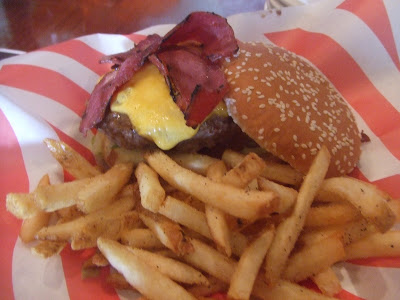 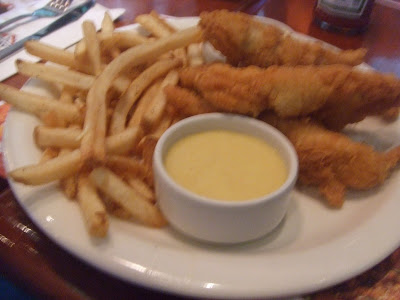 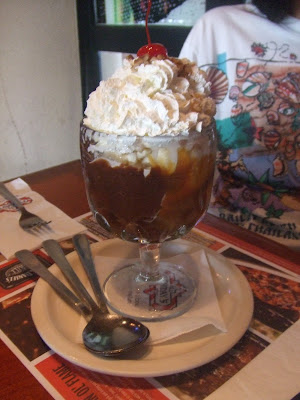 And we watched Prince Caspian. And the funny thing was, the movie started with the lady giving birth to a prince. So she was like screaming. And dunno why the twins started laughing. Then I laughed too because influenced by them. They have problem man...always laughing when they see violent scenes. Last time when we watched Hannibal Rising, same case. They were watching the 18PG like it was a comedy. Man I tell u. Frighttening!

But really really, I enjoyed spending time with them. It's bringing back the best memories of my school life. They are friends I cannot possibly forget. 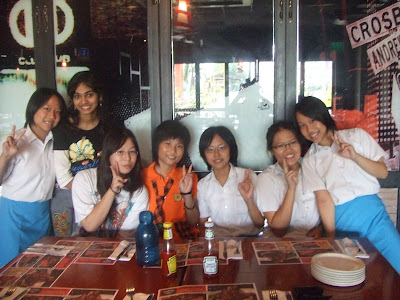