I've been sleepless for the past nights thinking of Convocation and what I'm gonna wear. Nope, it's not my Convocation, but I attended in the capacity of an award achiever. 2000 bucks for outstanding Intermediate results. I'm happy, proud of myself and most importantly, motivated to ahieve greater heights next year. 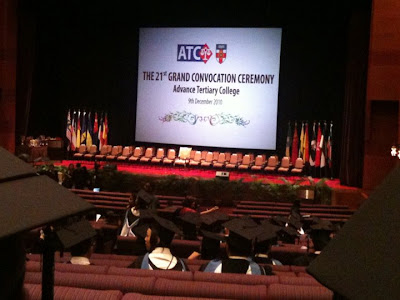 Mum wasn't able to make it so I thought never mind, but manatau she drove off the only car in the house, and I was left speechless, worrying about transport. Yes, in the nic of time worrying not about my hair or shoes but my mode of transport. Brilliant. Next, it was the fact being stuck at KTM worrying about whether the train will arrive late or not. Later, when I arrive at KLCC, it was worrying about the fact whether I'll slip on stage or not. Yes, I was anxious for no reason. Everytime something big hits, I'm always nervous.

That aside, I saw my friends there, some came to receive awards, some graduated, congrats. Some came to perform. Rotaractors came to sell flowers by convention. Some came to volunteer. But all, I'm sure haboured the similar mindset, which is by witnessing glorious moments of recognition of such, we will get motivated, inspired and encouraged to inject effort in whatever we're doing now so that next year, we can similarly, go up stage with heads held high, listening to the thunderous applause from the audiences. At least when I received my award from Prof. Wayne Morrission, I felt so. I felt the overwhelming emotion, the surge of motivation, amidst the mixture of emotions, the settled fact si that I want it to happen, and I want more. 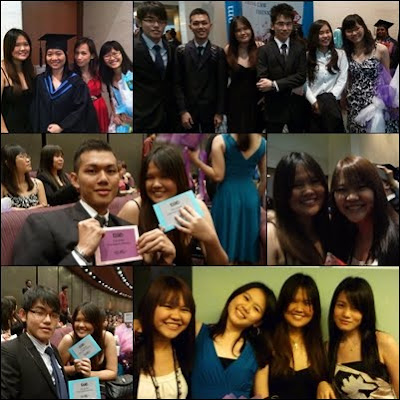 I felt happy because it was a proof to myself that I have did my duty as a student, and I performed it well. I wished my family was there to share. As a conclusion, it was one of the happiest moments in my life.

Above all, I thank God for His grace and everlasting love, for repeatedly blessing me with wonders, and forgiving me for the bad I've done. My family, for the support by any means. My friends, for actively (or passively XD) encouraging me. Tutors, for all the knowledge and guidance. Last but not least, Rotaractors, for the flowers (although you guys made a great deal of noise when giving the bouquet to me, but nontherless, you all gave, with a few stalks pluck out. Hehe.), and for giving me the support of attending the ceremony, ancilary to the purpose of selling flowers. 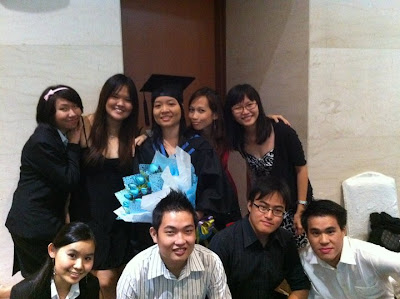 To the greatest bunch of people in the world, thank you.
Posted by huiting at 2:16 PM

Sure I'll save that money up and no, I won't belanja you. But thank you=) Loves!